The first single Rich played on was “Above and Beyond,” which peaked at #3. Owens and Rich toured somewhat haphazardly, throwing Owens’ acoustic guitar and Rich’s fiddle into the back of Owens’ old Ford pickup and hopping from bar to bar, dance hall to dance hall, playing with whomever musicians they could find. 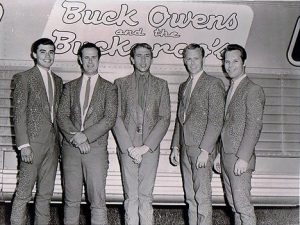 Owens and Rich continued recording singles in Bakersfield. In 1961, “Foolin’ Around” spent eight weeks in the number-two slot. Up to that point, Owens had stuck to the Texas Shuffle style, with Rich playing the role of the “lonesome fiddler”. That sound changed with Owens’ 1962 single “You’re For Me”, a song he had written several years prior. The shuffle on the snare drum moved to a tightly closed high-hat, and the off-beat was accented by an aggressive half-rimshot, half-click on the snare drum. The bass went from upright to electric. Owens dubbed it the “freight train” sound; it is now often referred to as the “Bakersfield sound”.

In 1963, for convenience when recording and touring, Owens decided to form a regular backing band, including drums, bass, and pedal steel, with Don Rich as the band leader. Owens’ old Ford was replaced with a Chevrolet camper. In the early years of the band, members came and went quickly. Alumni included Ken Presley (who died in a car accident while a member), Jay McDonald, Mel King, Wayne Stone, and Merle Haggard. Before leaving, Haggard dubbed the band “The Buckaroos”, and the name stuck.[2]

In early 1963, the Johnny Russell song “Act Naturally” was pitched to Owens. Owens was initially unimpressed, but Rich liked it, and they recorded it with The Buckaroos on February 12, 1963. It was released on March 11 and entered the charts of April 13. By June 15, the single began its first of four nonconsecutive weeks at the number-one position. It was Owens’ first number-one hit.[3]

“Act Naturally” marked Rich’s first appearance on lead guitar. Over the years, Owens had taught Rich his guitar style, and by 1963, Rich was mainly playing guitar, rather than fiddle, allowing Owens to concentrate on singing and acting as front man.

During the summer of 1963, The Buckaroos’ bassist Kenny Pierce walked out on the band during a tour. Rich called in a bass-playing acquaintance named Doyle Holly. Shortly thereafter, steel player Jay McDonald quit and was replaced by Tom Brumley. The classic Buckaroo lineup was in place.

Owens, Rich, and the band recorded two songs to release as a single in late January 1964. One was a fast song entitled “My Heart Skips a Beat”; the other was a slow ballad called “Together Again”. Rich played an excellent ride on “My Heart Skips a Beat”, and Tom Brumley played what has been called one of the greatest steel-guitar solos ever on “Together Again”. Both songs shot up to number one[3] simultaneously and switched spots multiple times.

Rich hired Willie Cantu, a young Texan, to play drums for The Buckaroos in January 1964. In July of that year, the new band recorded “I Don’t Care (Just As Long As You Love Me)”. This, too, went to number one, and featured another twangy Don Rich guitar solo.

In 1965, Owens and The Buckaroos scored hits with “I’ve Got a Tiger by the Tail”, “Before You Go” (co-written by Rich), “Only You (Can Break My Heart)”, and “Buckaroo”, which was the only instrumental ever to go to number one on the country charts. 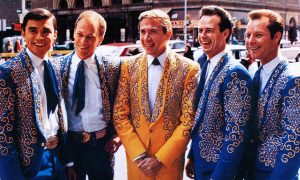 Around this time, musical equipment manufacturers took notice of The Buckaroo’s popularity. The Fender company had already given Buck Owens a golden sparkle Telecaster; now they gave Owens a Fender acoustic, Rich a champagne sparkle Fender Telecaster, and Doyle Holly a champagne sparkle Jazz Bass. Willie Cantu received a sparkle drum kit from Rodgers, and Tom Brumley got an 11-string pedal steel from ZB Guitars (This allowed Brumley to play Rich’s licks during the choruses of songs, leaving Rich free to harmonize with Buck).

On January 3, 1966, “Waitin’ in Your Welfare Line” (written by Owens, Rich, and Nat Stuckey) was released, and went to number one. On March 15, Buck and The Buckaroos began filming a half-hour television show called The Buck Owens Ranch Show. The show was filmed and distributed for several years, eventually being canceled because it came into conflict with another Owens project, the TV show Hee Haw.

In late March 1966, the group performed at Carnegie Hall in New York City. The show was recorded live and is considered by many to be one of the finest live country music records of all time. Owens later said that the band was so tight that they did not have to go back in postproduction and fix any mistakes, as none could be found.

Owens and Rich continued recording, scoring number-one hits in 1966 with “Think of Me” (written by Don Rich and Estella Olson) and “Open Up Your Heart”. In late 1966, bassist Doyle Holly left for a 9-month period, and his vacant spot was filled by Wayne Wilson. Owens and his band scored three number-one hits in 1967 – “Where Does The Good Times Go?”, “Sam’s Place”, and “Your Tender Loving Care” – and recorded another live album, this time in Japan, which also went on to great success.

In 1968, Owens and Rich began experimenting outside of the ‘freight train’ sound, but their success continued. “How Long Will My Baby Be Gone?” hit number one,[3] and the group recorded a live album at the White House (which was not released until 1972). Buck also signed onto Hee Haw in 1968, with Don Rich named musical director.

In 1969, Owens and Rich hit number one with both “Who’s Gonna Mow Your Grass?” and “Tall Dark Stranger”. Rich added a new experimental fuzztone guitar part to the former. Hee Haw aired on CBS from 1969 through 1971, and afterward promptly went into syndication. It remained a weekly series through the summer of 1992. The Buckaroos served as the house band, and Owens was suddenly getting national exposure on a weekly basis. Another live record, In London, was also recorded in 1969.

Buck Owens and The Buckaroos continued playing, recording, and filming episodes of Hee Haw. The Buckaroos’ lineup changed over time, until Don Rich was the only original member. Owens and Rich together would reach number one one last time with “Made in Japan”, which was released in 1972. Owens began turning his music back towards the style he had had in the earlier years. Tragedy struck the music world, though, and the success of this turnaround was cut short in an instant on July 17, 1974.