Don Rich used primarily Fender guitars and amplifiers. In the early days, Rich played Owens’ 1951 Fender Telecaster through a Fender Bassman amplifier. In 1964, Fender gave Owens an endorsement deal and the band gained instruments. Rich received a Telecaster that had both its body and headstock finished in champagne metal flake in addition to having checkerboard binding on both sides of the guitar’s body. The “champagne metal flake” finish was somewhat rough because it contained crushed glass. The band received other Fender amplifiers, as well, so Rich also played through a Twin Reverb amplifier. At some point, Don had a one-off Telecaster-ish Red Mosrite that is now in possession of the Owens estate. Buck’s 1951 Telecaster showed significant signs of being artist maintained rather than by a luthier: for example, there were pieces of paper under strings at the nut in slots that were slotted too deep. Owens and Rich received new guitars in 1966, a pair of Silver Flake Telecasters that were double bound in plain black. Also around 1966, Owens had Bakersfield guitar repairman/technic Gene Moles finish another set of guitars in red, white, and blue. Fender also gave Rich a Gold Sparkle Telecaster in the late 1960s that was bound in plain black. It had no finish on the headstock.

Fender’s deal with most of their artists was that they would exchange their instruments for new ones every seven years or so. Owens refused to return the instruments given to them by Fender, so Fender stopped giving them instruments. Gibson picked up on this, and in the early 1970s, they struck up a deal with Owens. Rich received an ES-335 and a Les Paul Professional model. Owens and Rich later went back to playing their red, white, and blue Telecasters. 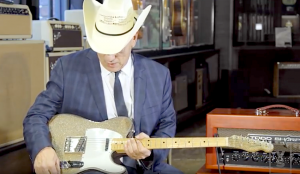 After finishing work at Owens’ Bakersfield studio on July 17, 1974, Rich was killed in a motorcycle accident.[1] He had been en route to join his family for vacation on the central coast of California. For unknown reasons, his motorcycle hit a center divider on northbound Highway 1 at Yerba Buena Street in Morro Bay. He was pronounced dead on arrival at Sierra Vista Hospital in San Luis Obispo at 10:55 pm,[6] 50 minutes after the incident was reported. California Highway Patrol officials stated that no skid marks and no apparent mechanical problems were found. Reports indicated that Owens had pleaded with Rich not to take his motorcycle that day, and had been pleading with him for years to quit riding.

Owens was devastated by Rich’s death and did not discuss it in interviews for years. In a late-1990s interview, Owens said, “He was like a brother, a son, and a best friend. Something I never said before, maybe I couldn’t, but I think my music life ended when he died. Oh yeah, I carried on and I existed, but the real joy and love, the real lightning and thunder is gone forever.

Years after Don’s death, Marlane remarried to Larry Dunivent and had two children. She continues to stay involved in Don’s legacy and endeavors to keep the love for his music alive.