Truly Rebel Songs! Grandson of the legendary Hank Williams, the founder of modern country music, and son of Randal Hank Williams, Jr., also a blues and country musician. The guy at the beginning of his musical career played in a punk band, but after that he decided to return to what his family did best – of course country music, damn it! Hank’s songs are the songs of a drunken gouging, partly desperate village romantic who didn’t give a fuck about all these cities of yours with their skyscrapers and other nonsense. The voice of the third Hank sounds according to all the patterns and ideas about country music – this vocal “in the nose”, familiar from cartoons and westerns. The predominance of acoustics was diluted in the Hillbilly Joker album with its heavy electric guitars, screaming vocals and other “southern” stuff.

The BossHossGlamorous German cowboys from Berlin. Ja-ja! The Germans also know how to play country music. The group gained its fame thanks to covers of well-known pop and not-so hits – Britney Spears, Snoop Dogg, White Stripes and many others. Having gained fame, The BoosHoos began to write music of their own composition and we must pay tribute to the Germans – it turned out very powerfully. The albums contain both acoustic songs and rock and roll, blues songs and up to hard rock.

TOP-5 best songs of The BossHoss

Honeyhoney A duet between Suzanne Santo and guitarist Ben Jaffe. Alternative country with female vocals mixed with acoustic rock and indie music. The vocalist is somewhat reminiscent of Amy MacDonald, but much closer to the banjo and roadside bars. Retro sound, blues echoes and Suzanne’s female vocals will make you want to listen to all the albums of this unusual duo. 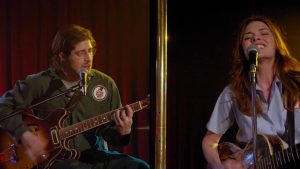 The Steeldrivers are a band from Nashville, Tennessee, where everyone’s favorite Jack Daniel’s comes from and of course these guys have a couple of whiskey-themed songs. The style of music they play is not exactly country – to be more precise, they play Bluegrass, which is one of the sub-genres. Bluegrass was created by colonists inspired by the music of the Appalachians, infused with Irish motifs, as well as African-American jazz rhythms. The Steeldrivers deserve your attention, if only for being nominated for a Grammy in 2009.

TOP-5 best songs of The Steeldrivers

Interesting acoustic country music from Spain. The guys play both covers and their own songs. They also have a great live album with Los Coronas. The songs mostly sound very positive with a “Spanish touch”.

That’s all for now – as soon as I stumble upon something tasty, I will definitely add it to this list. Also, if you know some interesting country band, be sure to write its name in the comments – there is never too much good music!