Donald Eugene Ulrich (August 15, 1941 – July 17, 1974), best known by the stage name Don Rich, was an American country musician who helped develop the Bakersfield sound in the early 1960s. He was a noted guitarist and fiddler, and a member of The Buckaroos, the backing band of Don’s best friend, country singer Buck Owens. Rich was killed in a motorcycle accident in 1974 at the age of 32 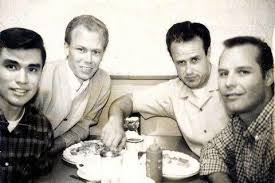 Donald Eugene Ulrich was born in Olympia, Washington, on August 15, 1941. The adopted son of Bill and Anne Ulrich, he grew up in nearby Tumwater, living at 6th and Ferry on Tumwater Hill, then later in a log house near Trosper Rd. and Capitol Blvd., next to his father’s barbering business. His parents began teaching Don the fiddle as early as age three, his father building a small scale violin for him to play. His parents entered him in numerous talent contests and had him playing at various events. He also began playing the guitar at an early age.

While attending Olympia High School (from which he graduated in 1959), Rich played in various local venues, as well as in the high-school orchestra. In September 1957, at age 16, he opened for Elvis Presley at the Tacoma Lincoln Bowl. He also formed an early rock-and-roll band called the Blue Comets with his friends, drummer Greg Hawkins and pianist Steve Anderson. By 1958, Rich was playing regularly at Steve’s Gay ’90s Restaurant in South Tacoma. Buck Owens, who was living in Tacoma while working at radio station KAYE, attended one of his shows and immediately went to speak with him; Rich was soon playing fiddle with Owens at local venues. They were featured on the weekly BAR-K Jamboree on KTNT-TV 11, where Loretta Lynn was a guest with them for her television debut. Soon after, Owens’ “Under Your Spell Again” made it to number four on the country music charts, and he returned to Bakersfield, California, to do more recording for Capitol Records.

Owens tried to convince Rich to come with him to Bakersfield, but Rich opted to go to Centralia College, where he served as a music tutor; he also continued playing local venues. While at Centralia, he renewed his acquaintance with Marlane Schindler, his future wife. They had met a few years earlier in Morton, a small town in eastern Lewis County, where Marlane reigned as Queen of the Morton Loggers Festival.

After a year of college, Rich decided to drop out and join Owens in Bakersfield, signing on for $75 a week in December 1960. Rich returned to Washington to escort Marlane to Nevada, where they married. Marlane worked in support of keeping Rich, Owens, and his Buckaroos performing. Don and Marlane had two children, Vic and Vance Ulrich.